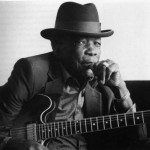 At the age of 15, Hooker ran away from home and in 1948 landed in Detroit, Michigan working at the Ford Motor Company and playing in the blues venues and saloons on Hasting Street.

Hooker won three Grammy Awards and in 2000 was awarded the Grammy Lifetime Achievement Award. His biography, “Boogie Man: Adventures of John Lee Hooker in the 20th Century”, was published in 2000. Hooker died June 21, 2001.