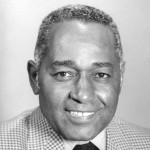 April 28, 2008 Will Robinson, the first African American head basketball coach at a Division I college, died.

Robinson was born June 3, 1911 in Wadesboro, North Carolina. As a high school student, he finished second in the state golf tournament despite not being allowed on the course with the white players. Robinson lettered in four sports at West Virginia State University where he earned his Bachelor of Arts degree in 1937.

Because of racial segregation in West Virginia, Robinson was forced to attend the University of Michigan where he earned his Master of Arts degree in physical education. After coaching YMCA teams in Pittsburgh and Chicago, in 1943 Robinson was selected for the head coaching position at Miller High School in Detroit, Michigan. Over his 25 year high school coaching career, Robinson enabled more than 300 students to attend college. During this time, he was also serving as a scout for the Detroit Lions football team, responsible for covering all the black colleges in the South.

Robinson discovered future NFL Hall of Famers Charlie Sanders and Lem Barney. In 1970, Robinson was hired as the head coach at Illinois State University, making him the first black coach in NCAA Division I basketball. Robinson retired from Illinois State in 1975 and accepted a position as a scout for the Detroit Piston basketball team. In that capacity, he discovered Joe Dumars and Dennis Rodman.

Robinson retired from the Pistons in 2003. In 1992, Robinson was presented the John W. Bund Lifetime Achievement Award, given annually “to an individual who has contributed significantly to the sport of basketball,” by the Naismith Memorial Basketball Hall of Fame.