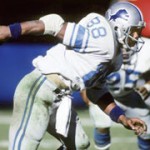 Sanders played college football at the University of Minnesota and was selected by the Detroit Lions in the 1968 NFL Draft. Over his 10 season professional career, Sanders was a seven-time All-Pro selection. Sanders retired after the 1977 season and from 1983 to 1988 served as a color analyst on the Lions’ radio broadcasts.

He is currently their assistant director of pro personnel. In 2007, Sanders was inducted into the Pro Football Hall of Fame. In 2005, he co-authored “Charlie Sanders’ Tales from the Detroit Lions.”