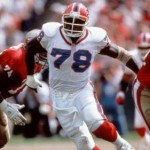 Smith played college football at Virginia Tech where he was All-American in 1983 and 1984 and won the Outland Trophy in 1984 as the nation’s top college lineman. Smith finished his college career as the most honored player in Virginia Tech history.

Smith was selected by the Buffalo Bills in the 1985 NFL Draft and over his 19 season career was an 11-time All-Pro selection and the Defensive Player of the Year in 1990 and 1996. Smith retired after the 2003 season with 200 quarterback sacks, the most in NFL history. In 2006, Smith was inducted into the College Football Hall of Fame and in 2009 he was inducted into the Pro Football Hall of Fame.

Since retiring from football, Smith has become a successful real estate developer.