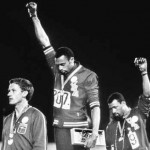 Smith won a track scholarship to San Jose State University where in 1966 he set the world record in the 200-meter race. Also at San Jose State, Smith was a co-founder of the Olympic Project for Human Rights, an organization formed to boycott the 1968 Mexico City Olympic Games to highlight human rights violations by the United States.

The boycott did not occur and Smith went on to win the Gold Medal in the 200-meter race at those games. At the medal ceremony, he and John Carlos raised their black-gloved fist in a black power salute. They also wore black socks and no shoes to represent African American poverty in the U.S. For these actions they were suspended from the U.S. team, banned from the Olympic Village, and they and their families were subject to death threats.

Smith later earned his Bachelor of Arts degree in Social Science from San Jose State and his Master’s degree in Sociology from Goddard Cambridge. He later became a track coach at Oberlin College where he also taught sociology and served on the faculty at Santa Monica College. Smith was inducted into the USA Track & Field Hall of Fame in 1978 and in 2007 his autobiography, “Silent Gesture,” was published. In 2008, he and Carlos received the Arthur Ashe Award for Courage at the ESPY Awards.