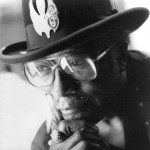 Between 1958 and 1963, he released eleven full-length albums. In 1987, Diddley was inducted into the Rock and Roll Hall of Fame, in 1998 he received a Lifetime Achievement Award from the Rhythm and Blues Foundation and a Grammy Lifetime Achievement Award, and in 1999 his song “Bo Diddley” was inducted into the Grammy Hall of Fame as a recording of “lasting qualitative or historical significance.” Diddley played at the presidential inaugurations of President George W. Bush in 1989 and President William Clinton in 1993. Bo Diddley died June 2, 2008. His biography, “Bo Diddley: Living Legend,” was published in 1998.