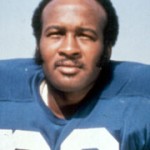 Renfro attended the University of Oregon where he was a track star and All-American halfback and defensive back. He was selected by the Dallas Cowboys in the 1964 NFL Draft and over his 14 year professional career was a five-time All-Pro selection.

Since his 1977 retirement, Renfro has committed himself to building up the inner-city community of Portland, Oregon through the Mel Renfro Foundation.