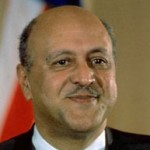 Weaver was appointed by President Lyndon Johnson the first Secretary of Housing and Urban Development (HUD) and served from 1966 to 1968. After leaving his cabinet post, Weaver became president of Baruch College in 1969 and in 1970 became a professor of urban affairs at Hunter College, from which he retired in 1978. In 1962, Weaver was awarded the NAACP Spingarn Medal. Weaver died July 17, 1997 and in 2000 the HUD headquarters building was renamed the Robert C. Weaver Federal Building. Robert Clifton Weaver Way in northeast Washington, D.C. is also named in his honor.