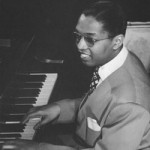 Taylor was born July 24, 1921 in Greenville, North Carolina but raised in Washington D.C. He earned his Bachelor of Science degree in music from Virginia State College in 1942 and later earned a master’s and Ph.D. in music education from the University of Massachusetts. Taylor began playing professionally in 1944 and performed with most of the jazz greats over his career, including Charlie Parker, Dizzy Gillespie, and Miles Davis.

Taylor’s recordings as a leader include “Cross-Section” (1954), “You Tempt Me” (1985), and “Ten Fingers – One Voice” (1998). In 1989, he was a co-founder of The Jazz Foundation, formed to save the homes and lives of elderly jazz and blues musicians. Taylor was a Distinguished Professor of Music at East Carolina University and artistic director for jazz at the Kennedy Center for the Performing Arts. Among his many honors, Taylor received 23 honorary doctorial degrees, the 1983 Emmy Award for Outstanding Informational, Cultural or Historical Programming, and the 2001 American Society of Composers, Authors and Publishers Jazz Living Legend Award.