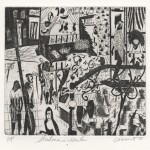 At the age of 15, he dropped out of high school and became a hobo working odd jobs and spending a year in the army. In 1953, he discovered his love of art and became a full-time artist. His first solo show was held at the Brooklyn Museum Art School Gallery in 1955.

In a career that spanned a half a century, Smith documented in brilliant color some of the most compelling events of the 20th century, including 1940s Harlem jazz clubs, civil rights workers confronting hate, and the creative militancy of the Black Arts Movement. One of his works, “Rootin Tootin Blues,” was presented to President William Clinton during his first inaugural ceremony. Smith’s work is in the collections of several museums, including The Newark Museum, The Brooklyn Museum of Art, and The Columbus Museum of Art.