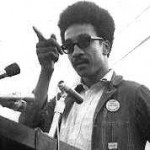 In the early 1960s, Brown became active with the Student Non-violent Coordinating Committee (SNCC) and in 1967 was named chairman of the organization. In 1968, he left SNCC and joined the Black Panthers, eventually becoming justice minister. One of his most famous proclamations during that time was “violence is as American as apple pie.”

Brown published his autobiography, “Die Nigger Die,” in 1969. In 1971, he was convicted of armed robbery and served five years in Attica Prison. While in prison, he converted to Islam and changed his name to Jamil Abdullah al-Amin. In 2002, al-Amin was convicted of 13 charges including the murder of a deputy sheriff and is currently serving a life sentence in prison.