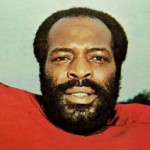 Webster played defensive back for Michigan State University from 1964 to 1966 and was an All-American his last two years. Webster was selected by the Houston Oilers in the 1967 American Football League Draft and was the AFL Rookie of the Year that season.

Over his ten season professional career, Webster was a three-time All-Star. He was inducted into the National Collegiate Football Hall of Fame in 1987. Webster died April 19, 2007 and that year Michigan State established the George Webster Scholarship Fund for former athletes completing their education at the school.