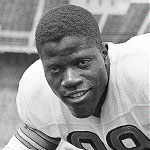 Willis played college football at Ohio State University and in 1944 was named an All-American. After graduating in 1945, he took a job as head football coach at Kentucky State College. Since the National Football League unofficially barred African Americans from playing, in 1946 Willis joined the Cleveland Browns of the All-America Football Conference, making him the first African American to play in the conference.

In his rookie season, he had to sit out the game against the Miami Seahawks because African Americans were forbidden by law from competing against white players in Miami, Florida. Willis played professional football for eight seasons and was named All-Pro each season. In 1971, he was inducted into the National Collegiate Football Hall of Fame and in 1977 he was inducted into the Pro Football Hall of Fame. On November 3, 2007, Ohio State University retired his number 99 jersey number and he died November 27, 2007.