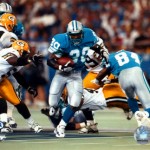 Sanders was selected by the Detroit Lions in the 1989 NFL Draft and that year won the NFL Offensive Rookie of the Year Award. Over his 10 season professional career, Sanders was a ten-time All-Pro, two-time Offensive Player of the Year, and the 1997 co-NFL Most Valuable Player. Sanders retired in 1999, stating that the culture of losing in the Lion’s organization robbed him of his competitive spirit.