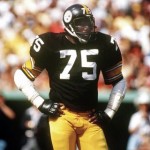 Greene played college football at North Texas State University and was a 1968 All-American. He was selected by the Pittsburgh Steelers in the 1969 NFL Draft and over his 13 season professional career was the 1969 Defensive Rookie of the Year, NFL Defensive Player of the Year in 1972 and 1974, a ten-time Pro Bowl selection, and four-time Super Bowl champion.