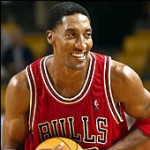 Pippen played college basketball at the University of Central Arkansas. He was selected by the Seattle Supersonics in the 1987 NBA Draft but is best known for his time with the Chicago Bulls. Over his 17 season professional career, Pippen was a seven-time All-Star, ten-time All-Defensive Team selection, and six-time NBA champion.

He was also a member of the Gold medal winning men’s basketball teams at the 1992 Barcelona Olympic Games and the 1996 Atlanta Olympic Games. He is the only person ever to twice win an NBA championship and an Olympic Gold medal in the same year. After retiring in 2004, Pippen worked as a basketball analyst for several television stations before returning to the Chicago Bulls as an ambassador for the team.