By Chimsima Zuhri on October 11, 2010 in African American History, October 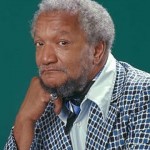 Foxx was born John Elroy Sanford on December 9, 1922 in St. Louis, Missouri. He moved to New York City in the early 1940s where he was an associate of Malcolm X. In Malcolm’s autobiography Foxx is referred to as “Chicago Red, the funniest dishwasher on this earth.”

Foxx gained notoriety with his nightclub act and was one of the first Black comics to play to White audiences on the Las Vegas strip. From 1972 to 1977, Foxx starred in the highly successful television series “Sanford and Son” and in 1972 won the Golden Globe Award for Best Television Actor in a Musical or Comedy.

From 1980 to 1981 he starred in the television series “Sanford.” Foxx died while rehearsing for another television series called “The Royal Family.” Jamie Foxx chose the surname Foxx as part of his stage name in tribute to Redd Foxx.