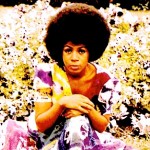 As a teenager, Riperton received operatic vocal training and was urged to study the classics. However, she became interested in rhythm and blues. Riperton’s first solo album, “Come to My Garden,” was released in 1970 and, although commercially unsuccessful, it is now considered a masterpiece by music critics.

In 1974, the album “Perfect Angel” was released and included the single “Lovin’ You,” which went to the top of the charts in the United States and number two in the United Kingdom. In 1976, Riperton was diagnosed with breast cancer and in 1977 became a spokesperson for the American Cancer Society. She was presented with the Society’s Courage Award by President Jimmy Carter in 1978.

In April, 1979, her final album, “Minnie,” was released which included the single “Memory Lane” which many consider her greatest work. Riperton died on July 12, 1979.