By Chimsima Zuhri on April 26, 2011 in African American History, April 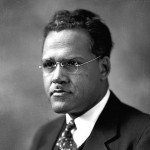 Patterson was born October 10, 1901 in Washington, D. C. He earned a bachelor’s degree from Prairie View State College in 1919, a Doctorate of Veterinary Medicine from Iowa State University in 1923, a Master of Science degree from Iowa State in 1927, and a Ph. D. in bacteriology from Cornell University in 1932. In 1935, Patterson was appointed President of Tuskegee Institute where he stabilized their finances within a few years of his appointment.

Another of his accomplishments was the start of the Black Army Air Corps which led to the Tuskegee Airmen. In 1943, Patterson proposed the creation of a consortium of black colleges that would raise money for their mutual benefit. The next year, 27 schools came together to form the United Negro College Fund. In 1953, Patterson retired from Tuskegee to become President of the Phelps Stoke Fund which provided financial support for the education of Africans, African Americans, and Native Americans. He served in that capacity until 1970.