By Chimsima Zuhri on November 11, 2010 in African American History, November 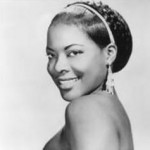 Baker began performing around Chicago under various names before settling on LaVern Baker in 1952. Her first hit recording came in 1955 with “Tweedlee Dee”, which reached number 4 on the R&B charts.

Baker received the 1990 Pioneer Award from the Rhythm and Blues Foundation and was inducted into the Rock and Roll Hall of Fame in 1991.