By Chimsima Zuhri on September 10, 2010 in African American History, September 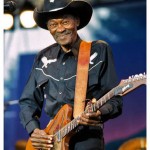 During the 1960s, Brown made several appearances on the television show “Hee Haw” and beginning in 1971 toured Europe 12 times, including several tours sponsored by the United States State Department.

In 1982, Brown won the Grammy Award for Best Traditional Blues Album from “Alright Again!”. In 1997, Brown was honored with the Rhythm and Blues Foundation Pioneer Award and in 1999 he was inducted into the Blues Hall of Fame.