By Chimsima Zuhri on February 3, 2011 in African American History, February 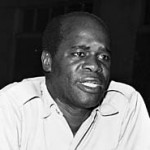 Mondlane was born June 20, 1920 in Portuguese East Africa. In 1953, Mondlane earned a bachelor’s degree in anthropology and sociology from Oberlin College and later a doctorate in sociology from Northwestern University. After graduation, he became a United Nations official and later joined the Mozambican pro-independence movement.

In 1962, Mondlane was elected president of FRELIMO and in 1964 the organization began a guerilla war to obtain Mozambique’s independence from Portugal. Mondlane was killed by a bomb planted in a book that was sent to him. In June, 1975, Portugal handed over power to FRELIMO and Mozambique became an independent nation. That same year, the university in the capital of Maputo was renamed Eduardo Mondlane University.