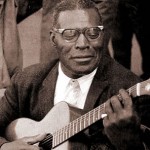 Wolf was born June 10, 1910 in White Station, Mississippi. During the 1930s, he performed in the South with a number of blues musicians, including Robert Johnson and Son House. His first recording, “How Many More Years,” was produced in 1951 and was a hit on the Billboard R&B charts. This was followed by other hits, including “Moanin’ at Midnight” (1951) and “I Asked for Water (She Gave Me Gasoline)” (1956).

Wolf was posthumously inducted into the Blues Hall of Fame in 1980 and the Rock and Roll Hall of Fame in 1991. In 1994, the United States Postal Service issued a commemorative postage stamp in his honor. The Howlin’ Wolf Memorial Blues Festival is held annually in West Point, Mississippi. His biography, “Moanin’ at Midnight, The Life and Times of Howlin’ Wolf,” was published in 2004.