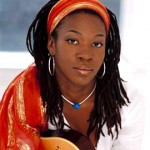 Arie’s mother moved the family to Atlanta, Georgia when she was 13. She attended Savannah College of Arts and Design to study jewelry making and, while there, gained an interest in the guitar. Arie eventually formed an independent record label, Groovement/Earthseed, and released a compilation album of songs by several artists, including one of her own.

Arie released her debut album, “Acoustic Soul” in 2001 and within months it was certified double platinum, selling more than 2 million copies in the United States and 3 million worldwide. This was followed the next year by “Voyage to India” which sold more than 1.4 million copies and won Grammy Awards for Best R&B Album and contained the single “Little Things” which won the Grammy for Best Urban/Alternative Performance.