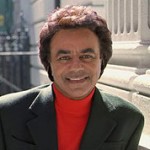 As a teenager, Mathis was known for his singing and athletic abilities. At San Francisco State College he broke classmate Bill Russell’s high jump record and in 1955 had to decide whether to pursue a recording career or tryout for the 1956 Olympics. Mathis decided on the recording career and in 1956 recorded two of his most popular songs, “Wonderful! Wonderful!” and “It’s Not For Me to Say.”

In 1958, “Johnny’s Greatest Hits” was released as the first ever greatest hits album in the music industry. That album was on the Billboard album chart for an unprecedented 490 consecutive weeks. Mathis also has the distinction of having the longest stay of any recording artist on the Columbia Record label, having been with the label from 1956 to 1963 and from 1968 to the present. To date, Mathis has recorded more than 130 albums with sales in excess of 350 million and more than 60 of his albums have been certified gold or platinum. He has received three Grammy Awards and in 2003 received the Grammy Lifetime Achievement Award.

Three of his recordings, “It’s Not for Me to Say” (1957), “Chances Are” (1957), and “Misty” (1959), have been inducted into the Grammy Hall of Fame as having “qualitative or historical significance.” Mathis continues to perform but has limited his concert engagements to 50 to 60 appearances a year. In 1982, Mathis authored the cookbook “Cooking for You Alone.”