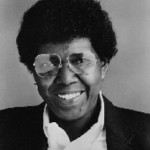 February 21, 1936 Barbara Charline Jordan, the first African American woman to serve in the United States House of Representatives from a southern state, was born in Houston, Texas.

In 1966, Jordan became the first black woman to be elected to the Texas State Senate where she served until 1972 when she was elected to the U.S. House of Representatives. During her time in Congress, she supported the Community Reinvestment Act of 1977 that required financial institutions to lend and make services available to underserved poor and minority communities and the renewal of the Voting Rights Act of 1965.

In 1976, Jordan became the first African American woman to deliver the keynote address at the Democratic National Convention and that speech is considered by many historians to be the best convention keynote speech in modern history. Jordon retired from politics in 1979 and became adjunct professor at the University of Texas. Jordon was inducted into the National Women’s Hall of Fame in 1990 and in 1992 was awarded the NAACP Spingarn Medal. Jordon was awarded the Presidential Medal of Freedom, the nation’s highest civilian honor, by President William Clinton in 1994 and the United States Military Academy’s Sylvanus Thayer Award in 1995, becoming only the second female recipient.

Jordan died January 17, 1996 and was the first black woman to be buried in the Texas State Cemetary in Austin. In April, 2009, a Barbara Jordan statue was unveiled at the University of Texas in Austin. Several schools in Texas are named in her honor as is the main terminal at Austin-Bergstrom International Airport. Her biography, “Barbara Jordan: American Hero,” was published in 2000 and a collection of her speeches, “Barbara Jordan: Speaking the Truth with Eloquent Thunder,” was published in 2007.