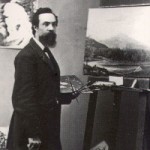 Brown was born February 22, 1841 in Harrisburg, Pennsylvania. Before he was 20, he moved to San Francisco, California where he established his own firm to produce illustrated bank notes, labels, maps, and stock certificates.

His production of “The Illustrated History of San Mateo County” (1878) featured 72 views of the county’s communities and ranches. Brown traveled the West producing maps and illustrations, including many landscape paintings.

From 1893 to 1897, Brown worked as a draftsman for the United States Army Corps of Engineers and from 1898 to 1910 worked in the civil engineering department of the city of St. Paul, Minnesota. His paintings are in the collections of museums throughout the United States, including the Smithsonian American Art Museum and the Oakland Museum of California.