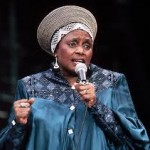 Makeba began her professional singing career in the 1950s with the Manhattan Brothers before she formed her own group, The Skylarks, singing a blend of jazz and traditional South African melodies.

In 1959, Makeba appeared in an anti-apartheid documentary “Come Back, Africa” and in 1960 her South African passport was revoked by the government. After testifying against apartheid in 1963 before the United Nations, her South African citizenship and right to return to the country were revoked. In 1966, Makeba and Harry Belafonte received the Grammy Award for Best Folk Recording for “An Evening with Belafonte/Makeba” which dealt with the political plight of black South Africans under apartheid.

Other albums by Makeba include “The Magic of Makeba” (1965), “Eyes on Tomorrow” (1991), and “Reflecting” (2004). In 1987, Makeba published her autobiography “Makeba: My Story” and in 1992 she starred in the movie “Sarafina!” In 1986, Makeba won the Dag Hammarskjold Peace Prize and in 2001 she was awarded the Gold Otto Hahn Peace Medal “for outstanding service to peace and international understanding.” Makeba died November 10, 2008.