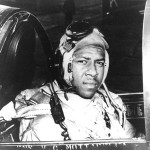 Brown enlisted in the Naval Reserve in 1946. After attending Navy pre-flight school and flight training, he was designated a naval aviator in October, 1948. He received his commission as ensign in April, 1949.