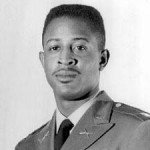 Pitts was born October 15, 1937 in Fallis, Oklahoma. In 1960, he graduated from Wichita State University with a degree in journalism. After being commissioned as an officer in the Army, he was sent to Vietnam in December, 1966.

In Vietnam, Pitts served as an information officer until he was transferred to a combat unit. On October 31, 1967, one month before he was to be rotated back home, his unit was called upon to reinforce another company engaged against a strong enemy force. Captain Pitts led an assault that overran the enemy positions and then was ordered to move north to reinforce another company. During that battle, Pitts seized a grenade from a captured Viet Cong and threw it toward an enemy bunker. The grenade hit some foliage and rebounded toward Pitts’ position.

Without hesitation, Pitts threw himself on top of the grenade which fortunately did not explode. Without regard for his own safety, Pitts continued to fire, pinpointing the enemy’s positions, while at the same time directing his men forward until he was mortally wounded.

On December 10, 1968, President Lyndon B. Johnson presented the Medal of Honor to Pitts’ widow and son and daughter.