By Chimsima Zuhri on October 6, 2010 in African American History, October 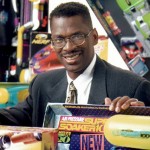 On May 7, 1986, Johnson received patent number 4,591,071 for the Power Drencher, a high power water gun. It was 1989 before Johnson could find a company to manufacture and distribute his invention. By 1992, the Super Soaker was the number one selling toy in America.

In 1991, Johnson formed his own company, Johnson Research and Development. He continues to create gadgets ranging from a new type of rechargeable battery to an advanced dart gun. Johnson has close to 100 patents to his name.