By Chimsima Zuhri on September 22, 2010 in African American History, September 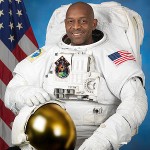 Satcher earned a Bachelor of Science degree in 1986 and a Doctorate degree in Chemical Engineering in 1993 from the Massachusetts Institute of Technology. He went on to earn a Doctorate of Medicine degree from Harvard Medical School in 1994.

In November, 2009, Satcher became the first orthopedic surgeon in space, logging over 259 hours.