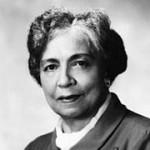 Ferebee was born October 10, 1898 in Norfolk, Virginia. She earned her Bachelor of Science degree from Simmons College in 1920 and her medical degree with top honors from Tufts University Medical School in 1924. Not allowed to intern at white hospitals in Boston, Ferebee did her internship at the Black owned Freedmen’s Hospital in Washington, D. C.

In the late 1920s, Ferebee opened the Southeast Neighborhood House to provide medical care and other community services to poor African Americans in D. C. From 1935 to 1942, she served as medical director for the Mississippi Health Project which deployed mobile medical units throughout impoverished regions of the deep South. In 1949, Ferebee was named director of health services at Howard University Medical School, a position she held until her retirement in 1968.

Ferebee served as the international president of Alpha Kappa Alpha Sorority from 1939 to 1941, president of the National Council of Negro Women from 1949 to 1953, and vice president of Girl Scouts of the United States from 1969 to 1972. In 1959, Ferebee was the first recipient of Simmons College’s Alumnae Achievement Award. The college awards several scholarships in her name each year.