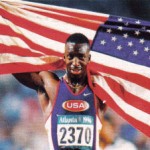 He is the only male athlete in history to win the 200-meter and 400-meter races at the same Olympic Games. He is also the only man to successfully defend his Olympic title in the 400-meter race. Johnson currently holds the world records in the 400 meter and 4 by 400 meter relay. In 1996, Johnson received the James E. Sullivan Award as the top amateur athlete in the United States and he was named ABC’s Wide World of Sports Athlete of the Year.

That same year, he published his autobiography, “Slaying the Dragon: How to Turn Your Small Steps to Great Feats”. Johnson retired from track after the 2000 Summer Olympics and currently runs a sports management company and a state of the art athletic training complex.