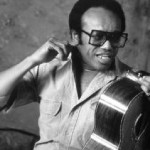 As a youngster, Womack and his four brothers formed a gospel group called the Womack Brothers and began touring the gospel circuit. In 1962, they were renamed the Valentinos and began to sing secular music. They had hits with “Looking For a Love” (1962) and “It’s All Over Now” (1964), which was written by Womack.

Womack was inducted into the Rock and Roll Hall of Fame in 2009.