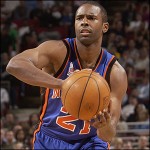 Ward played college football and basketball for four years at Florida State University. As a basketball player, he still holds the FSU record for career steals. As a football player, he won the Heisman Trophy, Maxwell Award, and Davey O’Brien Award in 1993. Also that year, Ward won the James E. Sullivan Award as the most outstanding amateur athlete in the United States.

During his senior year, he also served as student government vice president. After graduating, Ward was selected by the New York Knicks in the 1994 NBA Draft, making him the only Heisman Trophy winner to play in the NBA. Although he did not play baseball in college, Ward was drafted in the 1993 free agent draft by the Milwaukee Brewers and by the New York Yankees in the 1994 draft. Ward played in the NBA for eleven seasons before retiring in 2005 due to injuries.

In 2001, he established the aWard Foundation to enhance the lives of young people through sports based mentoring and educational programs. Ward was inducted into the College Football Hall of Fame in 2006 and in 2011 he received the John Wooden Keys to Life Award for continued excellence and integrity on and off the court. Ward is currently head football coach at a high school in Houston, Texas.’