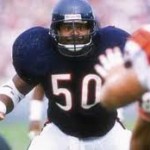 Singletary played college football at Baylor University where he earned All-American honors in 1979 and 1980. He is the only two-time winner of the Davey O’Brien Memorial Trophy given to the most outstanding player in the Southwest Conference. He also earned his Bachelor of Arts degree in 1983. Singletary was selected by the Chicago Bears in the 1981 NFL Draft and over his 12 season career was known as “the heart of the defense.”

He also was an eight-time All-Pro selection and NFL Defensive Player of the Year in 1985 and 1988. Singletary retired from playing in 1992 and in 2003 became linebackers coach for the Baltimore Ravens. In 2008, he became the head coach of the San Francisco 49ers, a position he held until he was fired in 2010. He currently is a motivational speaker and an ordained minister. Singletary was inducted into the College Football Hall of Fame in 1995 and the Pro Football Hall of Fame in 1998.

In 2001, he was designated Walter Camp Man of the Year, an award given annually to an individual closely associated with football as a player or coach who has attained a measure of success and been a leader in his chosen profession. Singletary published his autobiography, “Calling the Shots: Mike Singletary,” in 1986. Other books by Singletary include “Daddy’s Home at Last: What It Takes for Dads to Put Families First” (1998) and “Singletary One-on-One” (2005).