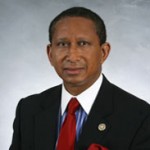 After serving in Europe during World War II as a sergeant from 1941 to 1944, in 1966 McKissick became the second national director of the Congress of Racial Equality. He served in that capacity until 1968 when he founded Soul City in Warren County, North Carolina. His vision was an integrated community with enough industry to support a population of 55,000. That plan never materialized. In 1990, McKissick was appointed a state district court judge and he died on April 28, 1991.