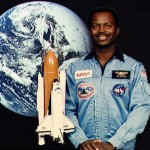 January 28, 1986 Ronald Ervin McNair, physicist and NASA astronaut, died along with six other crew members during the launch of the Space Shuttle Challenger.

McNair was chosen for the National Aeronautics and Space Administration program in 1978 and flew aboard the Challenger in February, 1984 as a mission specialist. A number of public places have been renamed in honor of McNair, including schools throughout the country. The United States Department of Education offers the Ronald E. McNair Post-Baccalaureate Achievement Program for low income, first generation, and/or under represented students.