January 28th in African American History – “We Are the World” 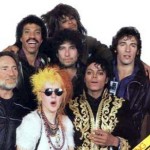 The idea for the creation of a song to benefit African famine relief came from Harry Belafonte and the song was co-written by Michael Jackson and Lionel Richie. The song was co-produced by Quincy Jones and released on March 7, 1985.

The song topped music charts around the world and became the fastest selling American pop single in history. It earned four Grammy Awards, including Record of the Year and Song of the Year, and as of 2009 had sold more than 20 million units and raised over $63 million for humanitarian aid for Africa.