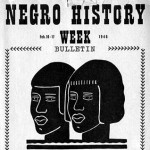 Carter was born December 19, 1875 in Virginia.  He studied at Berea College, University of Chicago and completed a PHd at Harvard University.  In 1915, he founded the Association for the Study of Negro Life and History as a beginning to teach people about black history and preserve documents and artifacts relating to black life and black people.

Throughout his life he worked to educated people about black men and women in history and their enormous contributions.  Woodson helped to publish many articles and documents when he founded the Journal of Negro History, Associated Publishers and the Negro Bulletin between 1916 an 1937.

Woodson chose the second week of February because it marked the birthdays of former President Abraham Lincoln and abolitionist Frederick Douglass.