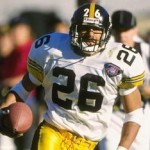 Woodson played college football at Purdue University and was an All-American in 1985 and 1986. He also was twice awarded All-America honors in track and field.

After earning his Bachelor of Arts degree in criminal justice from Purdue, Woodson was selected by the Pittsburgh Steelers in the 1987 NFL Draft. Over his 17 season professional career, Woodson was an eleven-time Pro Bowl selection and NFL Defensive Player of the Year in 1993.

He retired in 2003 and holds the league records for most interceptions returned for touchdowns and most interception return yards. Woodson was inducted into the Pro Football Hall of Fame in 2009 and currently serves as defensive backs coach for the Oakland Raiders.