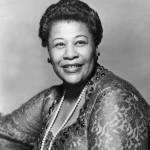 Fitzgerald was born April 25, 1917 in Newport News, Virginia. She made her singing debut at the age of 17 at the Apollo Theater and won the first prize of $25. In 1935, she began singing with the Chick Webb Orchestra and recorded several hits, including “A-Tisket, A-Tasket” (1938). In 1942, Fitzgerald left the band to start a solo career. Her 1945 scat recording “Flying Home” is considered one of the most influential vocal jazz recordings of the decade.

Between 1956 and 1964, Fitzgerald recorded eight multi-album sets that became known as the Great American Songbook. These were her most critically acclaimed and commercially successful works. Plagued by health problems, Fitzgerald made her last recordings in 1991.

Over her career, Fitzgerald sold more than 40 million albums and won 14 Grammy Awards, including the Grammy Lifetime Achievement Award in 1967. Other major honors include the Kennedy Center Honors Award (1979), induction in the Down Beat Jazz Hall of Fame (1979), designation as a NEA Jazz Master by the National Endowment for the Arts (1985), the National Medal of Art (1987), and the Presidential Medal of Freedom presented by President George H. W. Bush in 1992. The United States Postal Service issued a commemorative postage stamp in her honor. Biographies of Fitzgerald include “Ella: The Life and Times of Ella Fitzgerald” (1986) and “Ella Fitzgerald: A Biography” (1994).