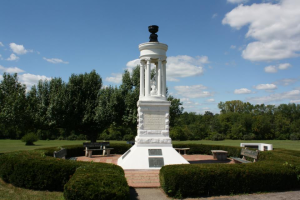 Wilberforce University actually has a history that pre-dates this important milestone. Before the Civil War began in 1861, the school was a site of abolitionist activity and education for African Americans. Methodist abolitionists founded the original institution in 1856 to provide an education for African Americans who arrived in Ohio often through the Underground Railroad, a series of safe houses that guided Southern slaves to freedom in the North. The havoc of the Civil War years caused the institution to fold temporarily. In the spirit of the Emancipation Proclamation that took effect on January 1, 1863, and freed slaves in the rebellious Confederate states, African American and white Methodists revived the school in its southwestern Ohio location as an educational alternative for the freed slaves in 1863. The date, July 10, 1863, is thus important as a reminder of the determination of African Americans to earn a quality education to protect their newly won freedom.

Abolitionist sentiment was high in Ohio when twenty-four leaders of the Methodist Episcopal Church and African Methodist Episcopal Church founded Wilberforce University for African Americans at Tawawa Springs in 1856. The original corporate board included such luminaries as Salmon P. Chase, the Ohio Governor. The board named the institution after William Wilberforce, a prominent member of the English Parliament who advocated for the end of the slave trade. The location of the school, 5 miles from the town of Xenia, had a relatively large free African American population. The area also receives recognition for its role in the Underground Railroad. Many of the whites and free blacks, hid in their homes, slaves escaping bondage in the South.

Student enrollment remained steady, with 200 attending in 1860, until the Civil War began in 1861. The Civil War, fight to end slavery, ironically created a decrease in enrollment, as students stopped coming from the South. Moreover, the Methodist establishment found it difficult to contribute to the school as they spent funds in ways more closely related to the war effort. These problems forced the school to shut its doors in 1862.

With President Abraham Lincoln issuing the Emancipation Proclamation on January 1, 1863, freeing all slaves in states still rebelling against the Union, the need for colleges for African Americans was never greater. Bishop Daniel Payne, of the African Methodist Episcopal Church, realized the now increased urgency of the cause to educate African Americans. Bishop Payne negotiated the purchase of the institution by the African Methodist Episcopal Church. On July 10, 1863, Wilberforce University reopened its doors to students under a new charter as a private college run by the church.

The school became an engine of intellectual and economic growth in the region. In 1888, the Ohio Legislature agreed to provide state financial support of Wilberforce; in return, the school promised to provide an increased emphasis on the industrial arts, along with its more traditional liberal arts focus. Also representative of this growth was the establishment of the separate Payne Theological Seminary out of the Wilberforce University Theological Department. Throughout the years, Wilberforce University enjoyed the services of many of the black intellectual elite, including Dr. W.E.B. Du Bois, the first African American to earn a Ph.D. from Harvard, who taught here from 1894 to 1896.