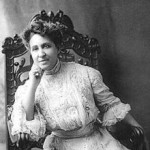 She also served as editor of the Oberlin Review. After college, Terrell taught at a black secondary school and at Wilberforce College. In 1895, she was appointed to the District of Columbia Board of Education where she served until 1906, the first black woman to hold such a position in the United States. In 1896, she was elected the first president of the newly formed National Association of Colored Women Clubs. In 1904, she was invited to speak at the International Congress of Women in Berlin, Germany, the only black woman at the conference.

In 1909, Terrell and Ida B. Wells-Barnett were the only black women invited to attend the organizational meeting of the NAACP. In 1913, Terrell was one of the organizers of Delta Sigma Theta Sorority and 26 years later wrote its creed, setting up a code of conduct for Negro women. Terrell’s autobiography, “A Colored Woman in a White World,” was published in 1940. The Mary Church Terrell House in Washington, D.C. was named a National Historic Landmark in 1975.

Terrell was among 12 pioneers of civil rights commemorated by the United States Postal Service with a series of postage stamps in 2009. Terrell’s name is enshrined in the Ring of Genealogy at the Charles H. Wright Museum of African American History in Detroit, Michigan.