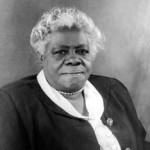 Bethune attended Scotia Seminary (now Barber-Scotia College) from 1888 to 1894 and then Dwight Moody’s Institute for Home and Foreign Missions (now Moody Bible Institute). In 1899, Bethune moved to Palatka, Florida where she ran a mission school and conducted outreach programs for prisoners. In 1904, she rented a small house in Daytona Beach, Florida and started the Literary and Industrial Training School for Negro Girls with 5 students.

By 1910, enrollment rose to 102 and in 1923 the school merged with the Cookman Institute for Men, became co-educational and eventually became Bethune-Cookman University. Bethune served as president of the college from 1923 to 1942 and 1946 to 1947. From 1917 to 1925, Bethune served as the Florida chapter president of the National Association of Colored Women and in 1924 she served as national president. She also served as president of the Southeastern Federation of Colored Women’s Clubs from 1920 to 1925. In 1935, Bethune founded the National Council of Negro Women to bring together 28 different organizations to facilitate improvements in the quality of life for women and their communities.

In 1938, the NCNW hosted the White House Conference on Negro Women and Children. Also in 1938, Bethune was appointed director of the Division of Negro Affairs in the National Youth Administration, making her the first African American female federal agency head. Bethune dedicated her life to the education of blacks and whites and in 1939 stated “not only the Negro child but children of all races should read and know of the achievements, accomplishments and deeds of the Negro. World peace and brotherhood are based on a common understanding of the contributions and cultures of all races and creeds.”

Bethune was awarded the Spingarn Medal by the NAACP in 1935 and in 1949 she became the first woman to be given the Medal of Honor and Merit, the highest award given by the Haitian government. Bethune died May 18, 1955 and in 1973 was posthumously inducted into the National Women’s Hall of Fame. In 1974, a sculpture in her honor was unveiled in Washington, D. C. and in 1985 the United States Postal Service issued a commemorative postage stamp in her honor.

In 2004, her last residence became the Mary McLeod Bethune Council House National Historic Site. There are also a number of schools across the nation named in her honor. Bethune-Cookman University now has 36 buildings and educates nearly 4,000 students a year.