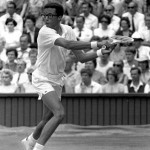 In 1963, Ashe became the first Black player selected to the United States Davis Cup team and in 1965 he won the National Collegiate Athletic Association tennis singles title. Ashe graduated from the University of California in the ROTC program with a Bachelor of Arts degree in business administration in 1966 and spent the next two years in the army, reaching the rank of first lieutenant. In 1968, Ashe won the U. S. Amateur Championship and the U. S. Open, the only player to ever win both in the same year. Ashe turned professional in 1969 and won the Australian Open in 1970 and Wimbledon in 1975.

Ashe retired in 1980 and was elected to the International Tennis Hall of Fame in 1985. Two months before his death on February 6, 1993, Ashe founded the Arthur Ashe Institute for Urban Health to address issues of inadequate health care delivery. Ashe’s memoir, “Days of Grace,” was published immediately following his death. Posthumously, Ashe received many honors, including a statue on Monument Avenue in Richmond, the 1993 Presidential Medal of Honor, the nation’s highest civilian honor, presented by President William Clinton, naming of the main stadium at the USTA National Tennis Center in his honor, a commemorative postage stamp issued by the United States Postal Service in 2005, and the naming of the ESPN Arthur Ashe Courage Award for a member of the sports world who best exhibits courage in the face of adversity. Also, many schools are named in his honor, including the Arthur Ashe Academy in Southfield, Michigan.