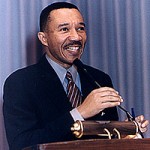 In 1978, Mfume was elected to the Baltimore City Council where he served until 1986 when he was elected to the United States House of Representatives. Mfume served five terms in Congress, including one term as chairman of the Congressional Black Caucus, before he resigned in 1996 to accept the presidency of the NAACP. Before stepping down in 2004, Mfume reformed the organization’s finances and paid down a considerable amount of debt. In 2006, Mfume lost in the Democratic primary race for one of Maryland’s U.S. Senate seats. His biography, “No Free Ride: From the Mean Streets to the Mainstream,” was published in 1996.