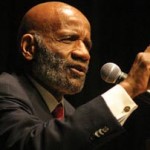 Bennett earned his Bachelor of Arts degree from Morehouse College in 1949 and served in the United States Army from 1951 to 1952. He joined Ebony Magazine in 1954 and for decades served as executive editor. Bennett is the author of several books, including “Before the Mayflower:

A History of Black America, 1619-1962”, which was published in 1963 and discusses the contribution of African Americans in the United States, and “Forced into Glory: Abraham Lincoln’s White Dream,” published in 2000 and questions Lincoln’s role as the “Great Emancipator.” Bennett has honorary degrees from several colleges and universities and in 2003 was awarded the Carter G. Woodson Lifetime Achievement Award by the Association for the Study of African American Life and History.