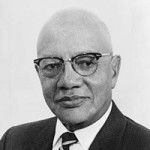 Nabrit was born September 7, 1900 in Atlanta, Georgia. He earned his bachelor’s degree in 1923 from Morehouse College and his Doctor of Laws degree from Northwestern University in 1927. In 1936, Nabrit joined the faculty of Howard University Law School and established the first civil rights course for a United States law school.

During his time at Howard, he also successfully argued a number of significant civil rights cases, including Lane v. Wilson (1939) concerning the registration of black voters in Oklahoma and Terry v. Adams (1953) concerning the right of African Americans to participate in primary elections in Texas. In 1958, Nabrit became dean of the Howard University Law School and two years later he was appointed president of the university, a position held until 1969. In 1966, President Lyndon B. Johnson appointed him U. S. deputy ambassador to the United Nations. The Howard University School of Law annually hosts the James M. Nabrit Jr. Lecture Series.